Andrea Cesari of Unsung Sewing Patterns guest posts on her most recent find: men’s and women’s anoraks and ski pants patterns from France.

Collecting vintage home sewing patterns that are designed primarily for function rather than fashion takes me down some interesting paths. In twelve years of collecting I’ve managed to acquire what may be the oldest surviving pattern for men’s work wear; ladies’ “sack” aprons across several decades; men’s outing shirts with button-on sleeves from the 1910s and ‘20s, 1920s gymnasium suits, WWII era women’s utility clothing designed by the U.S. Department of Agriculture, and just recently, 1950’s French ski wear.

Late in 2011 a large lot of French home sewing patterns started showing up on eBay. The patterns, which dated from the late 1930s through the early 1960s, were mostly for women’s clothing with typically soigne French styling. But tucked in amongst the listings for blouses and skirts and car coats were two patterns for men’s and women’s ski wear. Sans doubt, these needed a home in my collection!

Outerwear patterns represent a very small portion of the pattern companies’ catalogs and of that tiny sliver, patterns for clothes for winter sports are even less common – usually patterns for skating outfits for girls and women and snow suits for children.

The patterns for these men’s and women’s anoraks and ski pants are quite unusual. The patterns are undated, but the illustration style points to the 1950’s, and at a guess, I’d say the first half of the decade. The first winter Olympics after the war was held in St. Moritz, Switzerland in 1948, and Frenchman Henri Oreiller took home gold and bronze medals in alpine skiing. 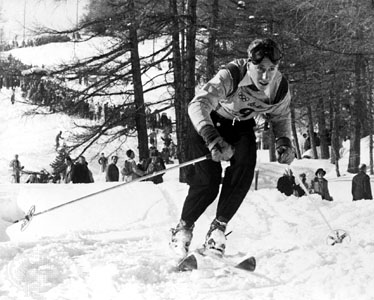 A combination of a recovering post-war economy and national pride in their French Olympian may have led to increased interest in skiing and inspired the designers at Patron Modelè to produce these designs in the early 1950s.

Because no separate instruction sheets were provided for these patterns, careful examination of the limited instructions on the envelope is required in order to understand the construction. Let’s look at the ladies COSTUME SPORT first. 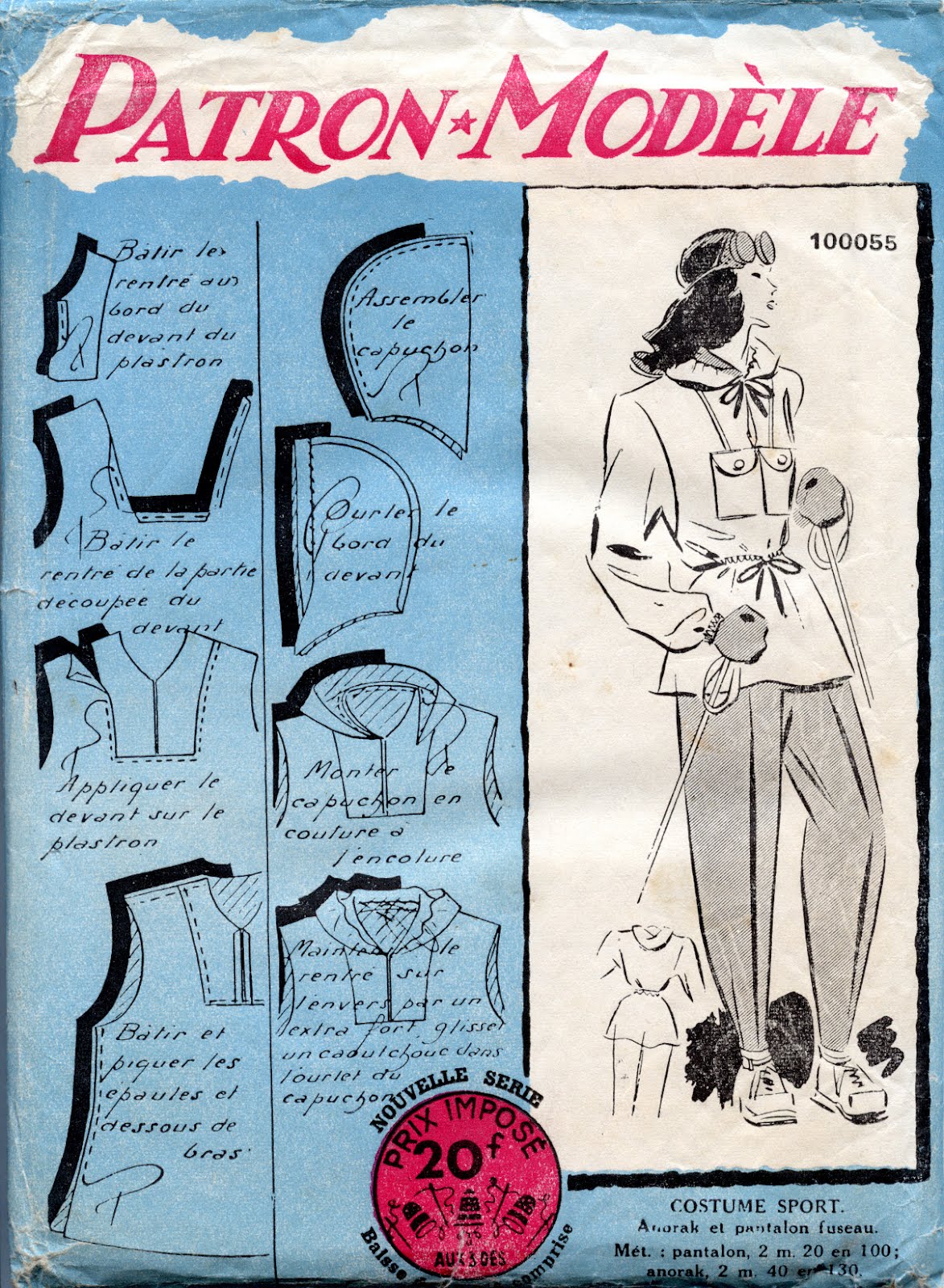 The full-cut pull-over anorak features an attached, gathered hood (capuchin fronce,) drawn in with an elastic around the face. The anorak is gathered in at the waist (taille fronces) with a drawstring. This nipping in of the waist assures that anorak won’t interfere with arm movement. Two small pockets with flaps (poche et rabat) are applied at the bottom the plastron front opening.

The pleated-waist trousers are cut full through hips and thighs for good mobility and are pegged at the ankles with a series of darts in both the front and back before being sewn onto narrow bands. Good-sized pockets in the trousers provide a place to stash mittens.

Both garments would probably have been made from woolen materials, although if I had the money, I’d be very tempted to make the anorak out of heavy, matte finish silk twill.

The gentleman’s style is very similar. The anorak includes design features you’d find in any good men’s jacket pattern, including two-piece sleeves and a vented back. A center front zip (fermeture) opening as well as zipped chest pockets are appropriate for sportswear, along with good-sized patch pockets at the lower edge. The sleeves are gathered into wrist bands. 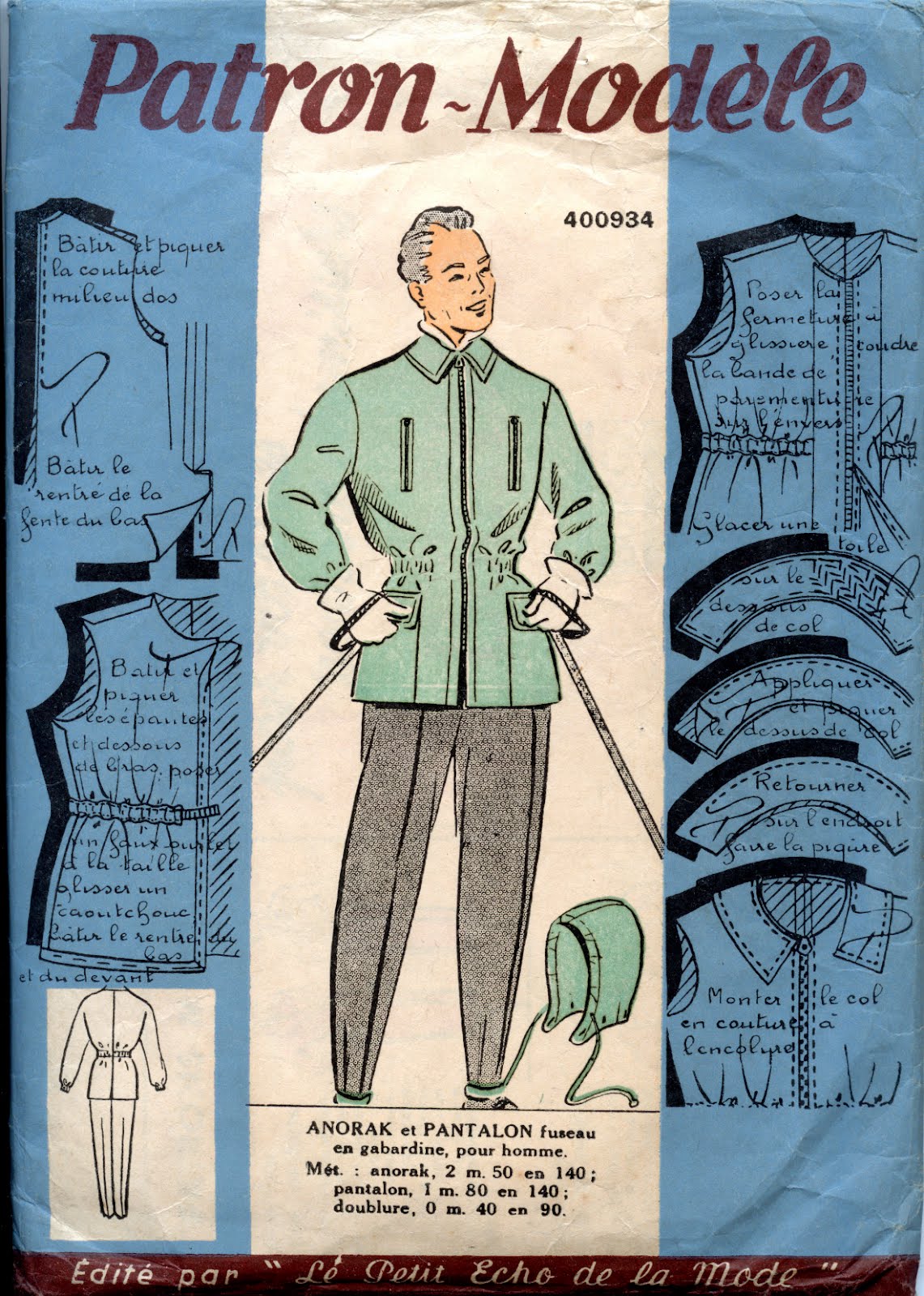 Again, the waist of the anorak is drawn in with an elastic (possibly one of the most wonderfully unpronounceable french words ever: caoutchouc.) The removable hood buttons to the anorak.

The fly-fronted trousers are pegged by means of darts (pinces) both front and back. Darts at the front waist remove some of the fullness from the seat and there are good-sized pockets. I had originally thought that the crotch was gusseted for reinforcement but on closer examination of the layout, it appears that the trousers are cut so full through the hips that they wouldn’t lay out on the fabric and had to be pieced. 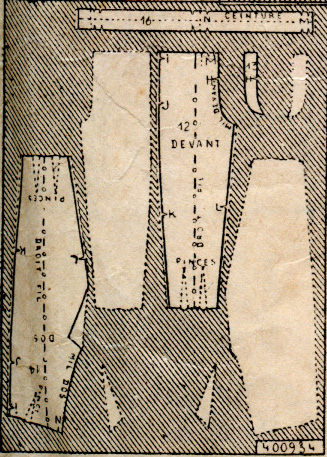 The instructions and illustrations on the envelopes provide a remarkable amount of information, but success in making up these patterns would depend on a pretty high degree of skill. Most seams would need to be hand-basted before machining, and the seams would then need to be clean finished for both durability and comfort.

Both patterns are unprinted and do not appear to have been used, although the envelopes had been unsealed.